Hailed as a viable, feature-rich and above all cost-effective professional graphic design package, Affinity Designer has taken the design community by storm.

Available without subscription on macOS, Windows and iOS, it contains everything pro designers need to create stunning illustrations, branding, icons and UI/UX designs, print projects, typography and concept art either from a desktop in their studio or on an iPad whilst on the move.

It also has a budget-friendly price tag – but don’t let that fool you! Affinity Designer is aimed squarely at creative professionals and has been built from the ground up to harness the full potential of the latest hardware available, making it fast, responsive and extremely powerful.

As well as bagging a coveted Apple Design Award and a plethora of 5 star App Store reviews, Affinity Designer has also won over many top illustrators, designers and artists who now use the software for professional commissions, creative mock ups and personal work.

In this article we look at 5 stunning examples of artwork created in Affinity Designer, the illustrators behind them and the process behind each piece.

If you would like to follow along with any of the tutorials you can download a 10-day trial of the full macOS or Windows version of Affinity Designer for free. Enrique Figueroa—aka Frankentoon—is an art director and illustrator from El Salvador. He loves to combine vector and raster graphics and his illustration styles range from high stylised vector drawings to painterly digital art.

Enrique has been an advocate of Affinity apps since their early release. Now an independent expert on all things Affinity his Frankentoon website provides a ‘one stop shop’ of learning tutorials, eBooks and beautiful creative assets like brushes and textures for Affinity Designer as well as Procreate.

Here he explains how he first discovered Affinity Designer and what impressed him about it: “I read about it on a blog (Creative Bloq if I’m not mistaken) back in 2015, purchased immediately and fell in love. My all-time favourite tool of Affinity Designer is the Adjustment Layers menu. The idea of changing colour settings without permanently affecting your illustrations makes you want to experiment and be more daring with your art. That’s one of the reasons I couldn’t go back to Illustrator.”

He created this colourful illustration ‘Joking Bird’ using a clever mix of vector and raster design tools in Affinity Designer for iPad.

Click here to read Enrique’s tutorial on how it was done. Steve Simpson is an illustrative designer whose distinctive, award winning style has caught the attention of internationally recognised clients, such as Disney Pixar, Jameson, Heineken, The Wall Street Journal, Kellogg’s, and Modelo.

His work has been sought after by a diverse range of clients, appearing on everything from a one inch postage stamp to a 200ft screen in Times Square and continues to arouse intrigue and curiosity worldwide.

It’s no surprise that Affinity Designer’s creators, Serif, sort out Steve to put the iPad version of the app through its paces with his instantly recognisable illustrative style. And the result? This stunning Day of the Dead inspired piece ‘La Vida Loca’.

Steve enjoyed the level of creative freedom he got when using Affinity Designer on his iPad and stated: “Affinity Designer for iPad is a fully featured vector app with raster tools available on a tablet. It’s a different level.”

You can see the making of ‘La Vida Loca’ and discover the main tools Steve used to create the piece here. Terry used his signature combination of bold shapes and retro colour palette to create this inspiring illustration ‘Desert River’ in the macOS version of Affinity Designer.

With a creative career spanning over 20 years you may wonder what inspired this seasoned professional to adopt Affinity Designer over some of the other well-known apps.

Terry explains: “When I first started illustrating, I used a combination of Adobe Illustrator and Photoshop. The draw to try something different came down to; cost, application bloat and speed (lack of), clunky, awkward or generally frustrating-to-use UI. Inefficiency—having to use two applications to complete my illustrations.”

So how did he come across Affinity Designer? “It was recommended to me by a fellow designer friend. Said given my style, I should give it a go. I did and fell in love with it! As for what impressed me about it? The speed, the intuitive sense to it, a refined toolkit—things just feel more common sense, if that makes sense.” Artist and illustrator Zutto lives in the middle of a Russian nature reserve, where she creates wildly-imaginative, ultra-colourful art.

She loves to experiment with different types of creativity, colour and drawing techniques, as well as frame-by-frame animation and describes her unique style as “liquid, colourful and complicated”.

Serif approached Zutto to made three pieces of artwork in her instantly recognisable style using Affinity Designer on desktop or iPad and one of them was this wonderfully vibrant piece titled ‘Create’.

Here she describes her experience of working with Affinity Designer: “It’s quite different from my previous experience with vector (I work with Adobe Illustrator). Affinity has great features I haven’t seen before and I really loved it. And I’m very happy with my finished works.”

She enjoyed working with Affinity Designer on her iPad most and described it as “Absolutely stunning”. She adds: “I found some of the features even more comfortable to use on iPad, especially being able to move and rotate the canvas with my fingers. I’m happy I chose the iPad to create the last piece as I knew Affinity Designer quite well by then… so I just enjoyed the process and it was really fast and smooth 🙂 The gradient tool is my favourite!”

Click here to see Zutto adding the finishing touches to her work in Affinity Designer for iPad.

5. ‘No Compromise’ by Tobias Hall Tobias Hall is a distinguished illustrator and mural artist based in London. His hand-crafted illustrative style has been sought out by many well-known brands including Zizzi, Toyota, Bombay Sapphire, YouTube and Time Magazine to name but a few.

After reviewing Affinity Designer for iPad for Digital Arts, Serif approached Tobias to create an illustration around the Affinity motto ‘No Compromise’. The result – a powerful and detailed charging bull.

Tobias talks us through the project: “The guys at Affinity provided me with a few phrases, and ‘NO COMPROMISE’ was the one that appealed to me the most in terms of being a succinct, impactful statement, so I thought I’d make that the main headline of the piece. I wanted the piece to feel like it could be a vintage-style poster for the software, so was keen to include a few more phrases that helped communicate the user experience. One of which was ‘Power and Precision’, and I thought a bull would be a good way of communicating ‘uncompromising power and precision’, so settled on that (plus, I kinda just wanted to draw a bull)”.

Here he describes working in Affinity Designer for iPad: “For me it’s about speed—especially during the roughs process—the ability to get ideas down and refine/edit them digitally as opposed to on paper just speeds up to process so much. Then the fact that I can continue on to final art all within the one app is just amazing—it’s totally transformed my practice.”

Watch Tobias in action creating ‘No Compromise’ in Affinity Designer for iPad.

Try out the full version of Affinity Designer for free!

If you’ve been inspired by the stunning artwork created in Affinity Designer and would like to try it out for yourself you can, for free! Its creators Serif offer a 10-day free trial of the desktop app which enables you to play with all its awesome features and decide whether it’s right for you before you buy.

If getting your head round new software seems a little daunting, they have produced a vast library of tutorial videos to help users learn all they need to know about the app. You can check them out on Serif’s dedicated Affinity Designer YouTube channel here.

You simply buy the app once and get free updates until version 2. Bargain!

You can find out more information about Affinity Designer and purchase your copy here.

Built from the ground up with a meticulous focus on workflow and blazing performance, Affinity apps are engineered to be the smoothest, fastest, most precise, and most integrated creative apps available. Created in partnership with some of the world’s leading designers, they have won over 200 awards internationally and have reached over 6.5 million customers worldwide. 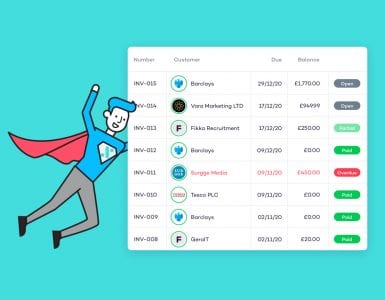 If 2020 did anything for freelancers it reinforced the importance of a rainy day fund. Whether you found yourself on pause for months at the start of Covid-19, you’ve started a new freelance business after redundancy, or business has been...

Here at Twine, we're more than just a freelancing platform. We're a global community of over 400,000 freelancers, with a mission to empower creatives and champion all aspects of their craft. As a result, we have started a weekly logo design...

Fund Your Freelancer Future: The Magic Of Investing & Compound Interest

Amongst the many perks of freelancing comes with financial burdens: inconsistent wages and little financial support for those down months. This makes saving for your future particularly difficult. After being left out of the government’s workplace...

How Much Do Freelance Animators Make? | The Complete Guide